The HP Water Lancing was effective at removing the deposit and preparing the tubes for Eddy Current testing which was the primary reason for cleaning. However, the cost and time associated with the HP Water Lance method caused the customer to pursue other cleaning methods.

The Mechanical Rotary Brush Method was less costly than HP Water Lancing and was moderately effective at removing the deposits. However, some brushes were broken off at the start of the u-bend and could not be removed by the contractor performing the work.

Based on the customers’ needs and concerns with these methods, NHE recommended using the NHE U-Tube Cleaning Dart (patent pending). The propulsion method was an air/water gun. The U-Dart was able to clean all of the deposit from the straights of the tubes similar to the HP Water Lance. Also, cleaning the U-bends was achieved with the U-Darts which are able to pass through every tube radius in the bundle that were not being cleaned with the prior two methods. Additionally, the NHE U-Dart was able to push out the brushes that were stuck and left in the tubes by a prior contractor. 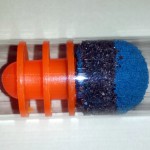 NHE U-Tube Dart – removed what other methods left behind.

The choice is clear…

WHEN YOU WANT IT CLEAN, THINK... NHE!
We use cookies to ensure that we give you the best experience on our website. If you continue to use this site we will assume that you are happy with it. OkPrivacy policy